Wandering in Kallang, we came across this wonderful little Satay shop.

“Est since 1974”–anything older than you, you had better take seriously. =) So we paused for a closer look… and asked the Malay auntie, “What is Satay Kahwin ah?” She started to crane her neck trying to peek around us, “Ohhh, just now that man buy lah… where ah… where is he ah…” Nevermind–if someone just bought it, we’re not getting left behind; so we ordered Satay Kahwin and of course, a few sticks of different Satay.

Impression forms such a major part of any food experience, and we must say that this shop has got most of their impressions right.

A motherly Malay auntie dressed in her traditional baju kurung, diligently fanning the hot charcoal grill; a beautiful flame that crackles and spits every time fat from the meat drips onto the red-hot coals below; glistening sticks of succulent meat caramelising in the intense heat… It is going to be good, is it not?

The Satay did not disappoint. Hot from the grill no more than 5 metres from where we were sitting, the tender savoury grilled meat did justice to everything else we had seen. We also noted that the meat on each stick felt full and substantial, unlike some Satays that have more bamboo than meat. Mixed Satay = 79 Brownie Points! ($0.50 per stick)

The finale was, of course, the Satay Kahwin. 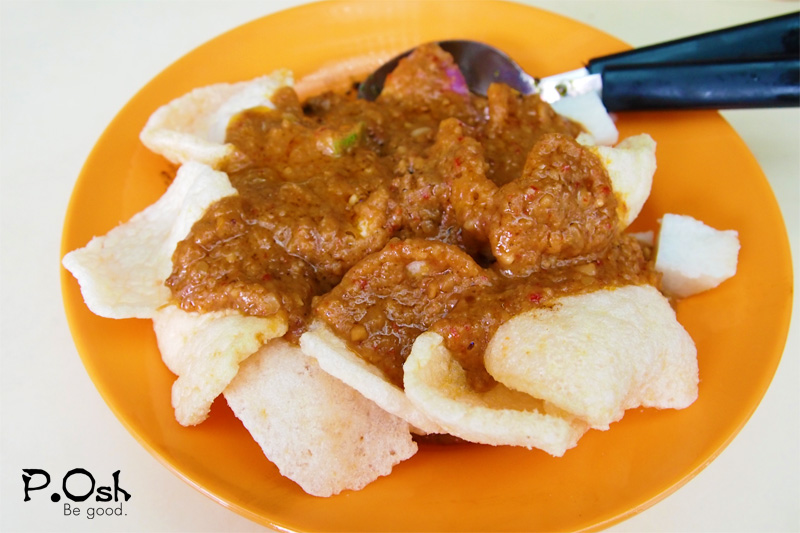 Kahwin in Malay means “to get married”. Well, in food, it would have to mean “fusion”, where different things are put together. This was four sticks of Satay, Ketupat, Onions, and Cucumbers tossed together into a dish, and topped generously with Keropok and Peanut Sauce. This is simply brilliant–but do forgive us if we are the last few people who realised this wheel was invented–because the variety of tastes and textures makes this a joy to eat. Better still, as the Keropok soaks up the Peanut Sauce, their tastes combine while a new texture develops… Genius. =)

All mixed up, for a better look at Genius. Satay Kahwin = 83 Brownie Points! ($2.50) The Singaporean in us couldn’t help but realise that since there were four sticks of Satay in this, everything else cost $0.50–mindblown.

This Satay shop sells great Satay; what else could you ask for?

20% OFF All Whole Cheese Cakes! We do island-wide same-day delivery at only $4.80! Happy shopping! Dismiss